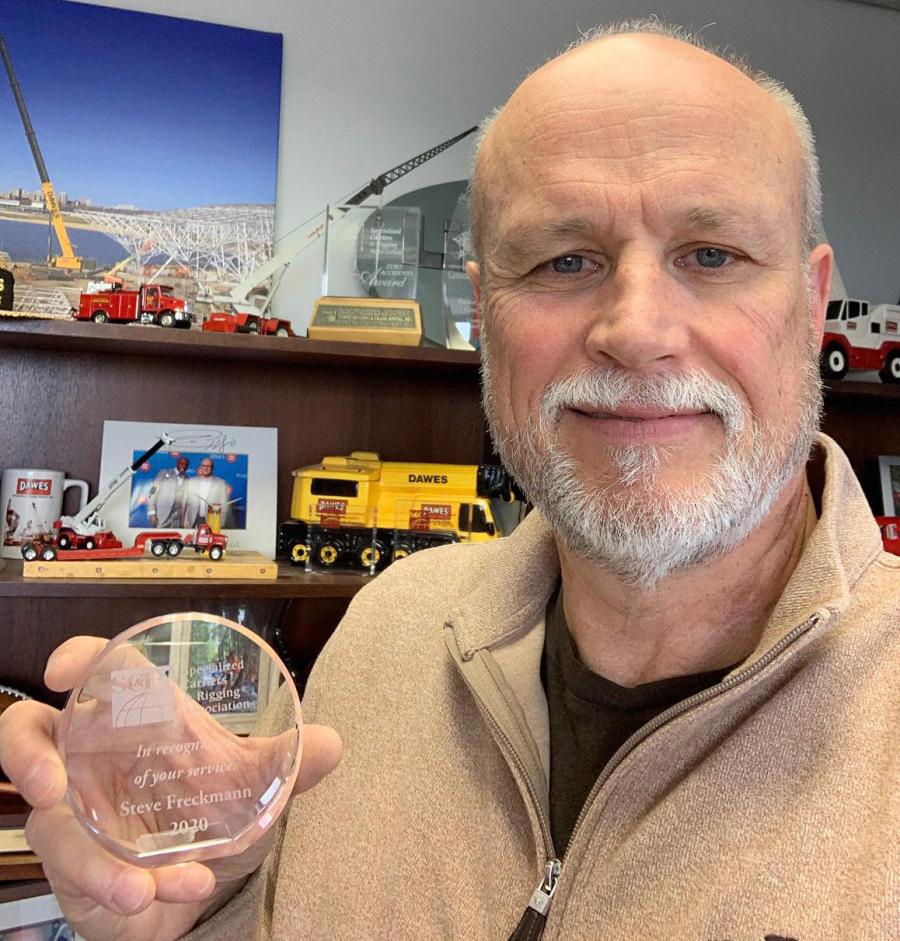 Steve Freckmann, general manager of Dawes Rigging & Crane Rental, a member of the ALL Family of Companies, has received the Pinnacle Award from the Specialized Carriers and Rigging Association (SC&RA).

The Pinnacle Award signals the end of Freckmann's three-year term on the association's board of directors, and also recognizes his more than decade and a half of involvement in leadership positions within the association.

Based in Washington, D.C., SC&RA is an international trade association of crane and rigging professionals with more than 1,400 members in 46 nations. Dawes was one of seven founding companies that formed the association in 1947.

"Steve has brought his expertise and methodical approach to every post he's held with SC&RA," said Beth O'Quinn, SC&RA senior vice president, crane & rigging. "Since 2007, he has continuously held positions on one of our committees, helping to shape the future of our industry, culminating with the recent completion of his term on our board of directors. I know he will continue to lend his unique perspective in the years to come."

Freckmann continues to serve on SC&RA's labor committee and, in addition to his service on the board of directors, has previously served on the nominating committee, workshop program task force, and was chair of the crane and rigging group.

"SC&RA is a vital organization to our industry, with so many men and women — and many of my own ALL Family colleagues — working hard to advocate for safe, prosperous operations. I'm happy to lend my support to an organization I believe in so strongly. But others are more deserving of accolades," Freckmann said.

Freckmann, whose father Thomas Freckmann was an owner of Dawes Transfer, which later became the Dawes brand the industry knows today, was born into the crane business and has spent his life dedicated to it. Freckmann calls SC&RA the largest association voice for the industry, advocating on its behalf to governments and governing bodies at home and abroad. In addition to advocacy, explained Freckmann, SC&RA offers training and education, crane operator certification, industry-specific standards and guidelines, networking opportunities, and leadership and development programs for the next generation of crane and rigging professionals.