ALL Crane Sets Zoo's Rainforest Dome in a Single Pick 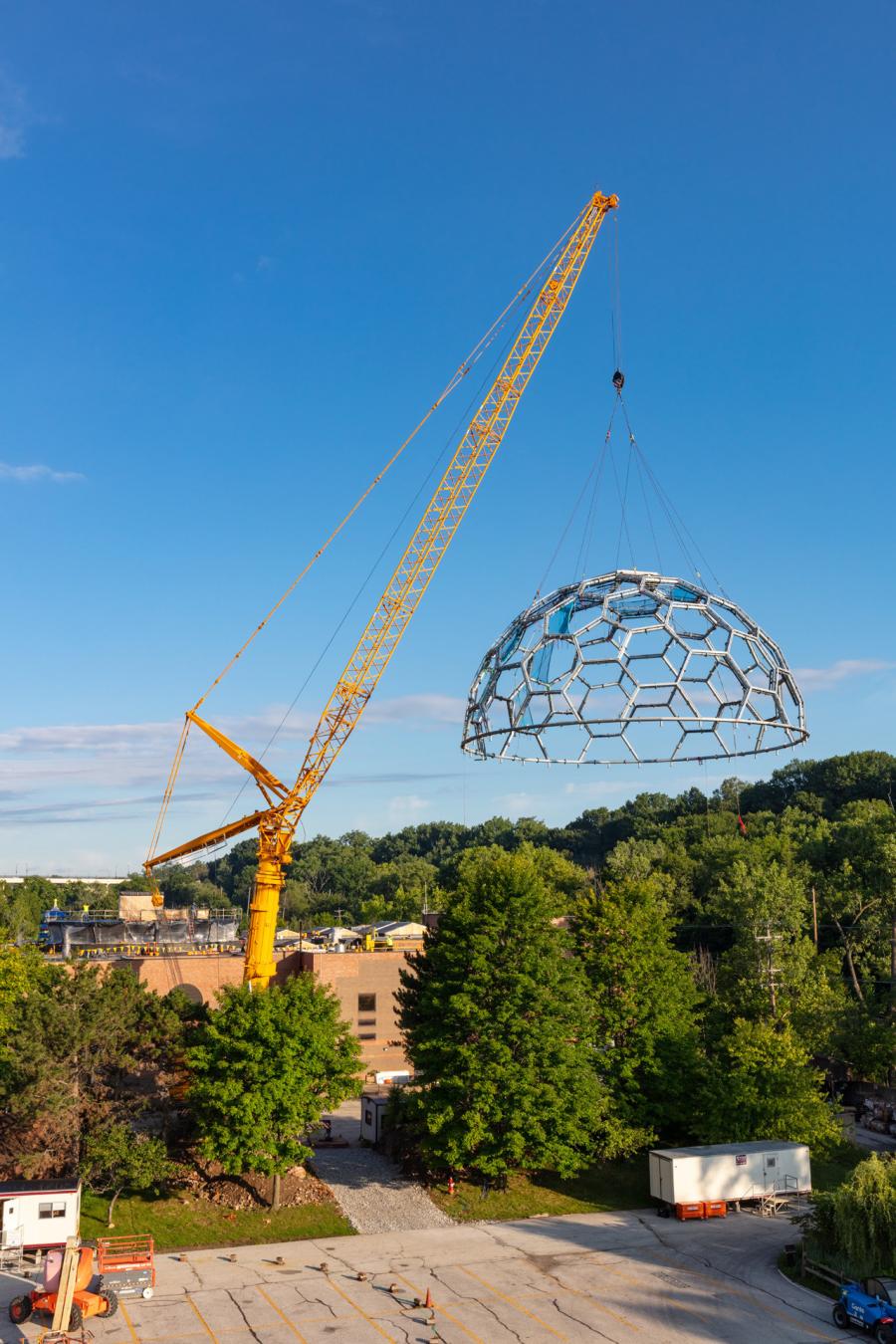 The new direction called for assembling the full dome structure on the ground, instead of in the air. Finished, the new, pre-fab metal dome is 36 ft. tall and 73 ft. in diameter. It weighs 77,000 lbs.

To tame a jungle, sometimes you have to send in a bigger beast. This idea was reinforced recently at the Cleveland Metroparks Zoo as a new geodesic dome was installed over its RainForest habitat.

Initial plans called for the dome to be set in four sections and then joined together over the habitat. For this, ALL Erection & Crane Rental of Cleveland, a member of the ALL Family of Companies, was ready to assign a 500-ton crane to assist with the installation. However, the sectional approach was deemed too time-consuming and could perhaps challenge the precision the new dome required.

After some collaboration, a new lift plan was developed — to set the entire dome as a single piece.

The new direction called for assembling the full dome structure on the ground, instead of in the air. Finished, the new, pre-fab metal dome is 36 ft. tall and 73 ft. in diameter. It weighs 77,000 lbs, roughly equivalent to the weight of nine to 19 — depending on how much you feed yours — adult hippopotamuses (which do not live in rainforests, by the way).

The new size and weight, combined with the 140-ft. lift radius necessitated by the lift environment, influenced the decision to call in the higher-capacity machine.

ALL Erection & Crane Rental of Cleveland, working with the project's general contractor, Regency Construction, specified a 600-ton capacity Liebherr LTM 1500-8.1. Outfitted with 53 ft. of main boom, 161 ft. of luffing jib, and 363,800 lbs. of counterweight, the crane had the power and the reach needed to lift and position the large dome.

"At this configuration, the crane was rated for 86,000 lbs., ensuring we were more than able to lift and set the dome," said Mike LiPuma, sales and rental manager of ALL Crane.

"There really are so many ways to get a thing done, but having a crane arsenal like ours allows us to plan alongside the customer and maximize efficiencies."

The dome was assembled in the zoo's parking lot. The LTM 1500 set up in the lot, too, between the finished dome and a line of trees that acts as buffer between the lot and the zoo. After lifting the dome high enough to clear the trees, the crane operator had to swing 180 degrees to set the dome inside the zoo on top of an existing foundation.

In this instance, using the larger crane saved money for the customer, because the dome was set in a single day.

"The previous plans, calling for the dome to be lifted in multiple sections, would have required the smaller crane to be on site for approximately four days," said LiPuma. "Instead, lifting the dome as a single piece, then holding it in place so it could be secured to the foundation, took only a few hours."

The RainForest opened nearly 30 years ago and is home to 600 animals and more than 10,000 plants. Its original dome was leaking, and the replacement will correct this problem in addition to providing better UV penetration and improved energy efficiency. 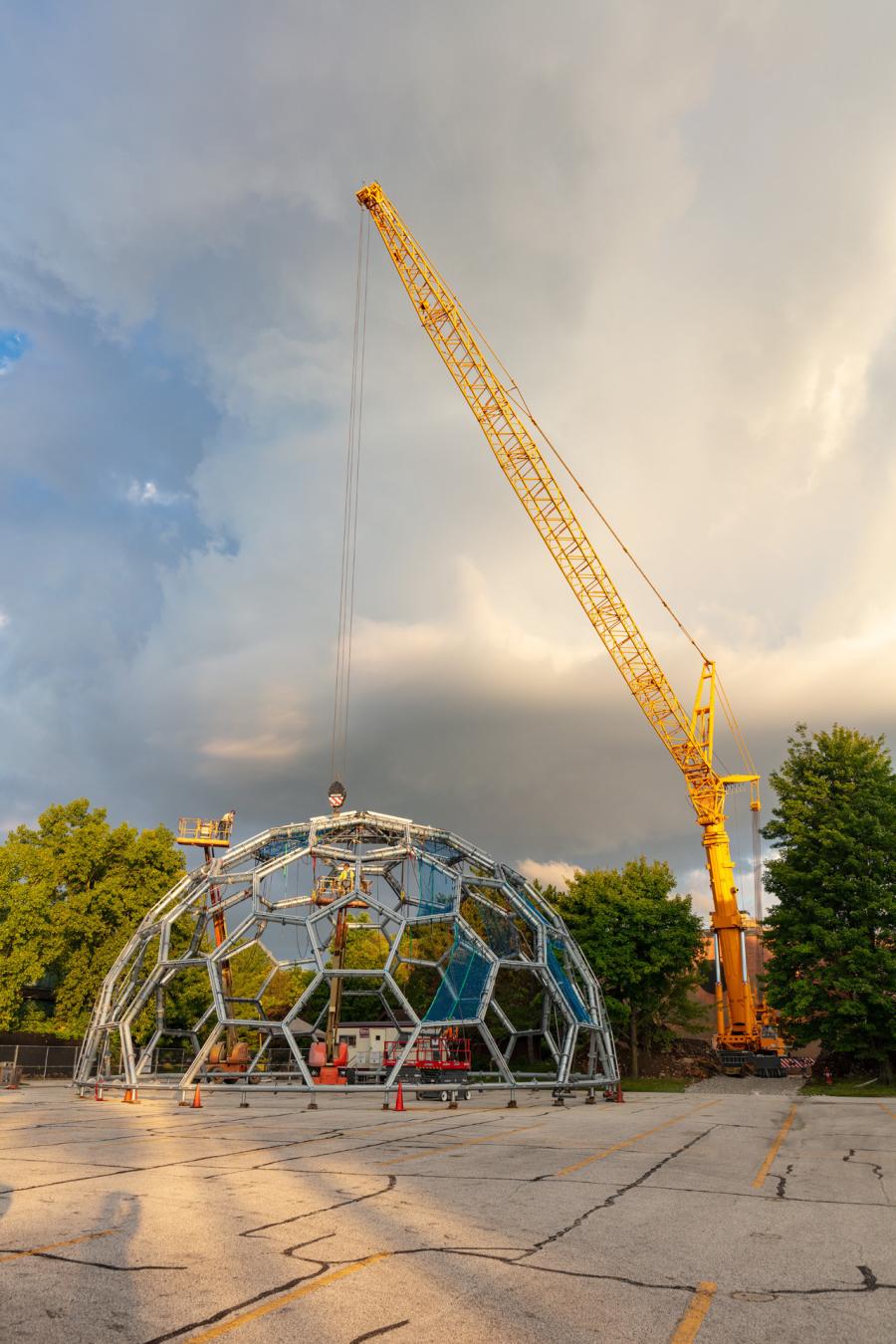