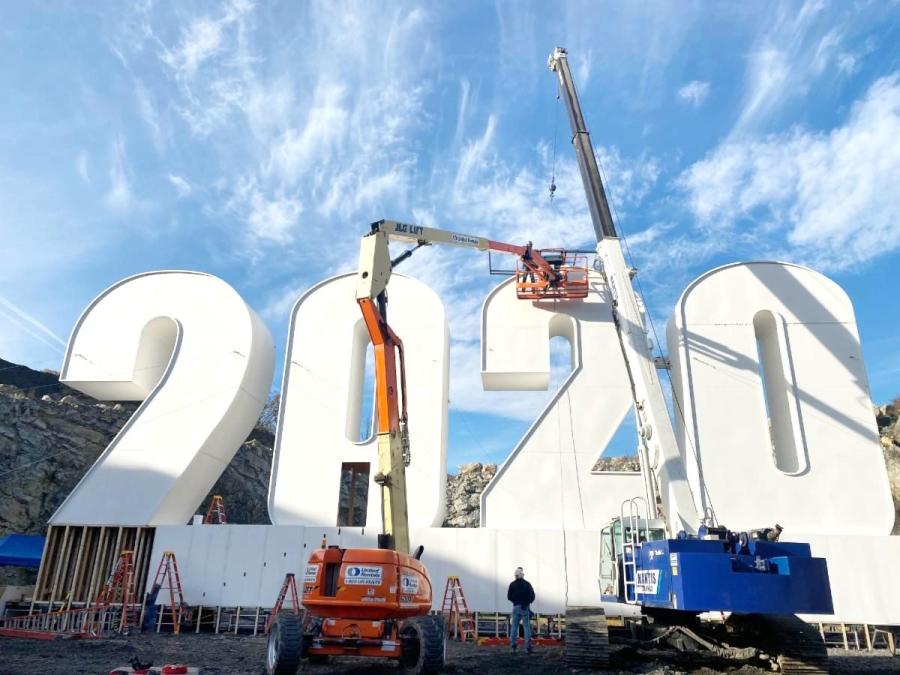 Callahan & Nannini was hired to assemble a 50 ft. high "2020" structure for the late night show "Last Week Tonight" with John Oliver. Of the 30 different picks it took to assemble, the heaviest was approximately 5,000 lbs.

VP Rob Nannini said, "It had LED light strips on the inside so we had to be very careful while picking sections."

Callahan & Nannini used a 6010 Tadano Mantis, which it purchased from Empire Crane.

"The 6010 is a great crane. It moves around the quarry very easily and gets into tight spaces because it's not very big," Nannini said.

The employees of German company Neeb received three new Grove all-terrain cranes during a handover at the Manitowoc factory in Wilhelmshaven in November 2020.

ALL is reinvesting heavily in its mobile all-terrain fleet, announcing a massive haul of 21 new cranes from Liebherr that will be delivered throughout 2021.

Tadano announced it has added Alta Equipment Company as an authorized distributor of Tadano all terrain and rough terrain cranes, as well as Demag all terrain cranes and Tadano-Mantis telescopic boom crawler cranes, in Illinois and Indiana.

Demag already had an 88 ton (80-t) crane at one point: The AC 80-2. "The worldwide success that this model had showed that there's significant interest in a crane with this kind of lifting capacity," said Michael Klein, the product marketing manager in charge.

ALL Family of Cranes Working at Ohio State University Campus →

On Nov. 14, 2020, the Ohio State Buckeyes did not play at Maryland as scheduled — another college football postponement brought on by the coronavirus pandemic.