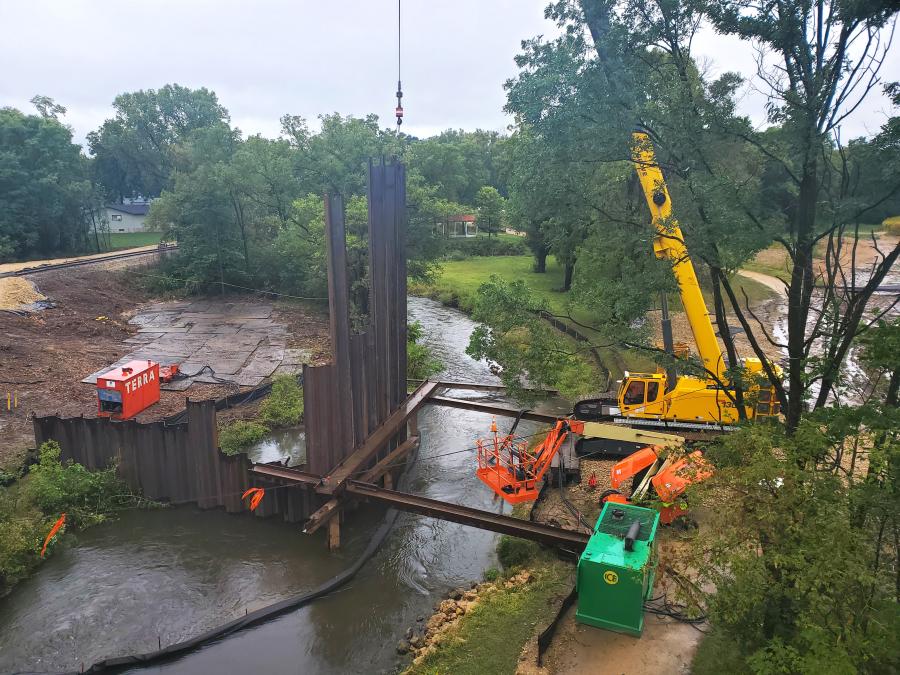 An environmentally sensitive and time-restricted project called for reconstruction of a river embankment and relaying of a gas line with minimal disturbance.

Following a spate of flooding that led to the collapse of the embankment of a trout stream in Mazomanie, Wis., a gas line had been exposed and required replacement.

"The Department of Natural Resources presented us with a very tight timeline to do the work and to cause the least amount of disturbance to the trout stream," said Trevor Kauffeld, project manager/estimator at Terra.

"This included installing sheet pile cofferdams in phases as the gas line was replaced and relaid through the stream bed. We wanted to use a crane that could handle a decent load at a long reach. This way, we could set up in one location and avoid the impact — and time penalty — of relocating the crane to the other side of the stream."

The suggestion to use a Grove GHC130 came from Milwaukee-based American State Equipment, the local Grove and Manitowoc dealer and rental provider.

"We have found them to be not only a great source of equipment, but also knowledge and a willingness to help," Kauffeld said. "I gave them a description of what I needed to do, and they called out this crane for us as their recommendation."

As a fully self-rigging crane that can be transported to the job site in three to five loads, the GHC130 features self-assembled, hydraulically installed counterweights and frame-mounted jacks for track installation, making setup fast and simple. Its hydraulically extendable tracks provide a choice of three working gauges to maximize stability and flexibility.

With a maximum capacity of 132 tons and a robust, full-power four-section main boom that can telescope from just over 41 ft. to just under 132 ft. while under load, the GHC130 was the ideal choice for the task. Although even while routinely undertaking picks in the 10,000 to 15,000 lbs. range at radiuses of up to 95 ft., the job still didn't push the load chart to its limits.

"The boom and capacity were what we were really looking for with this job, but the cabin comfort was a real bonus for the operator," Kauffeld added. "The 20 degrees of tilt it offered made controlling the long-reach operations much easier."

In addition to comfort features, such as the climate control and air-suspended heated seat, the operator's job is made much easier via the load-sensing, dual-axis joystick controls. Visibility is enhanced with a color monitor that displays images from up to four exterior cameras, and a graphical RCL (Rated Capacity Limiter) for load moment with advanced crane performance optimization and diagnostics.

As for the trout stream, things have pretty much returned to normal, despite having a crane on its bank for 3.5 weeks.

"Thanks to the GHC130, we completed the job well within schedule, and with minimal environmental impact," Kauffeld said. "But I wouldn't have expected any different — I've been using Grove cranes for almost 20 years now on different sites. They have always held up well, with minimal downtime."

As a specialist in complex construction solutions, covering earth retention, deep foundations, utilities, waterways, railways and energy infrastructure, as well as demolition, there will undoubtedly be many more opportunities for the company to rely on the Manitowoc family of cranes. Terra was incorporated in 1972, and now provides critical interaction between project designers, architects, structural engineers and geotechnical engineers from its offices in Madison and Pewaukee, Wis.