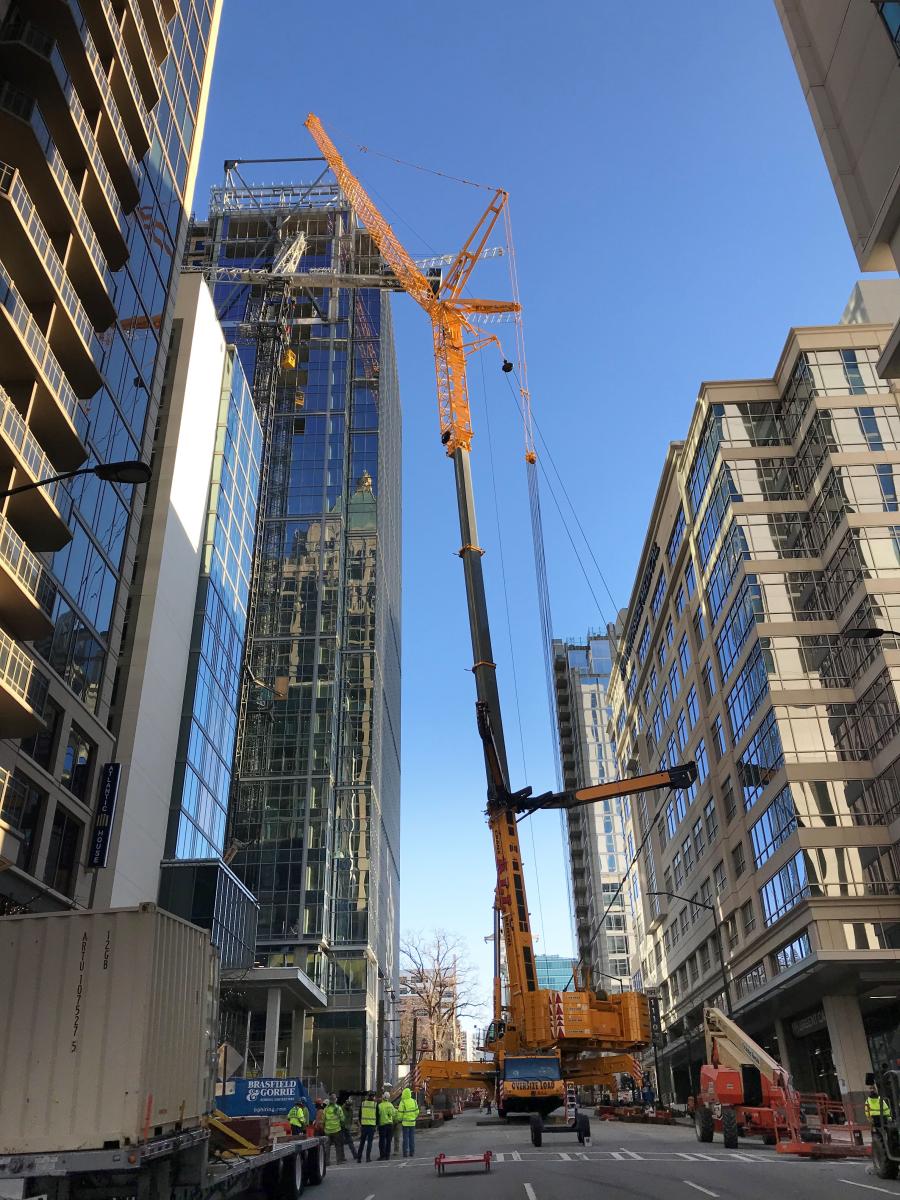 ALL’s Liebherr LTM 1750, the workhorse of the rescue effort, was configured with 164 ft. of main boom, a 62-ft. extension and 253 ft. of luffing jib. 449,700 lbs. of counterweight provided balance for the extended reach. The crane also included Y-guying for increased lifting capacity and improved lateral stability.

We say that every well-executed lift is preceded by massive amounts of preparation. Why is preparation so important? Because you have to plan for when lift day doesn't go, well, according to plan.

That kind of quick-shift-to-plan-B was needed this spring when a customer-owned tower crane suddenly began to lean over a building under construction in midtown Atlanta. As it would happen, "plan B" was ALL Crane Rental of Georgia, a member of the ALL Family of Companies, swooping in for a sky-high rescue. The customer had a well-established relationship with ALL, knew its capabilities, and knew it would respond to the challenge safely and efficiently.

Trouble began when a third-party crew contracted by the customer was in the process of jacking down the tower crane. A failure during the process caused the tower to lean backward, and some bolts snapped off. Fortunately, no one on the crew was injured. However, the tower remained leaning 360 ft. above the ground, posing risk to pedestrians, vehicles and neighboring buildings.

The incident occurred near the intersection of 13th Street and West Peachtree Road in the heart of Atlanta's Midtown district. West Peachtree is a busy thoroughfare that had to be shut down immediately. Four buildings on the block were evacuated.

The general contractor who owned the tower crane called on ALL to aid in recovery efforts for the wayward tower. ALL got the call because of its prior relationship with this contractor. In a stroke of good fortune, ALL's Georgia yard is the only one in the area with a crane that has the reach and capacity to help — a 900-ton Liebherr 1750-9.1.

"You don't normally see a 1750 set up on a city street," said Rusty Caldwell, sales and crane specialist of ALL Crane Rental of Georgia. "Even though this is a major metropolitan street, it was dwarfed by the presence of a 900-ton crane."

A third-party engineering firm was contracted by the customer to create a game plan for removing the precariously perched tower. Recommendations included inserting a new tower structure within the original tower assembly to add stability as it was taken apart piece by piece.

ALL's Liebherr LTM 1750, the workhorse of the rescue effort, was configured with 164 ft. of main boom, a 62-ft. extension and 253 ft. of luffing jib. 449,700 lbs. of counterweight provided balance for the extended reach. The crane also included Y-guying for increased lifting capacity and improved lateral stability.

Due to the tight confines of the urban location, Caldwell said there was less than one foot of clearance between the Y-guying and one of the nearby buildings.

The process of removing the disabled tower took several days, as there were multiple components of the tower that had to be removed in careful order. The two large cranes often worked in tandem, trading off on supporting weight to ensure a smooth process. Caldwell credits ALL's crane operators, Justin Thacker (in the 1750) and Dustin Adams (in the 1500), for their cool performance under pressure, as the rescue received significant media coverage.

In total, the process took a week.

As pieces were removed, there was room on the building's job site to lay down the parts. They remained there until the entire tower had been dismantled. The reason was so the larger cranes could be disassembled and removed from the busy street as soon as possible to restore vehicle traffic. Once the 1750 and 1500 were gone, the 110-ton LTM 1090 remained on the scene to pick up and set tower pieces onto flatbeds so they could be trucked out. The 1090's dramatically smaller size allowed traffic to resume as this phase of the work was being done.

"This was a situation unlike anything we had ever seen," said Caldwell, who is quick to credit the teamwork, including the engineering and the skill of the ironworkers, for helping to accomplish the rescue mission smoothly and efficiently. "In the end, the customer was happy — and the motorists of Atlanta were happy to have their street back." 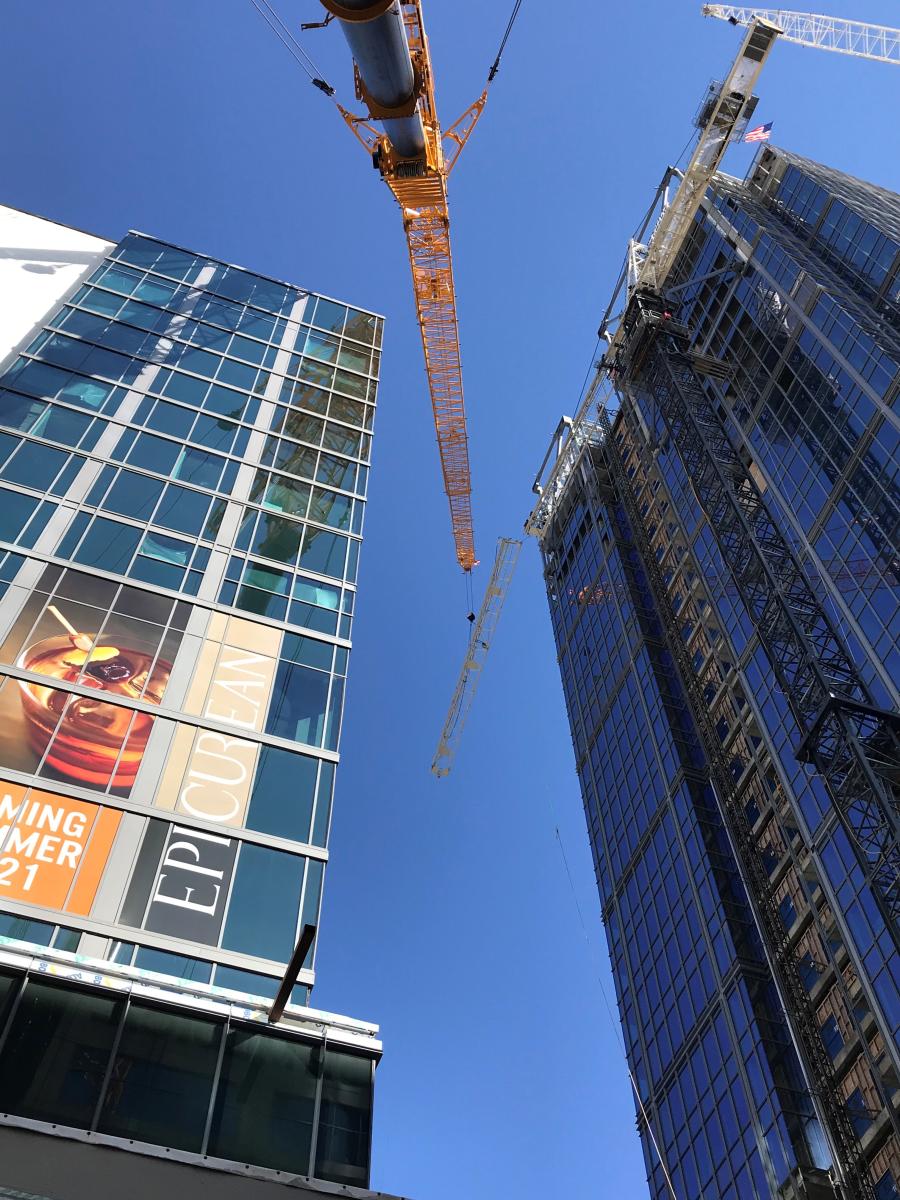