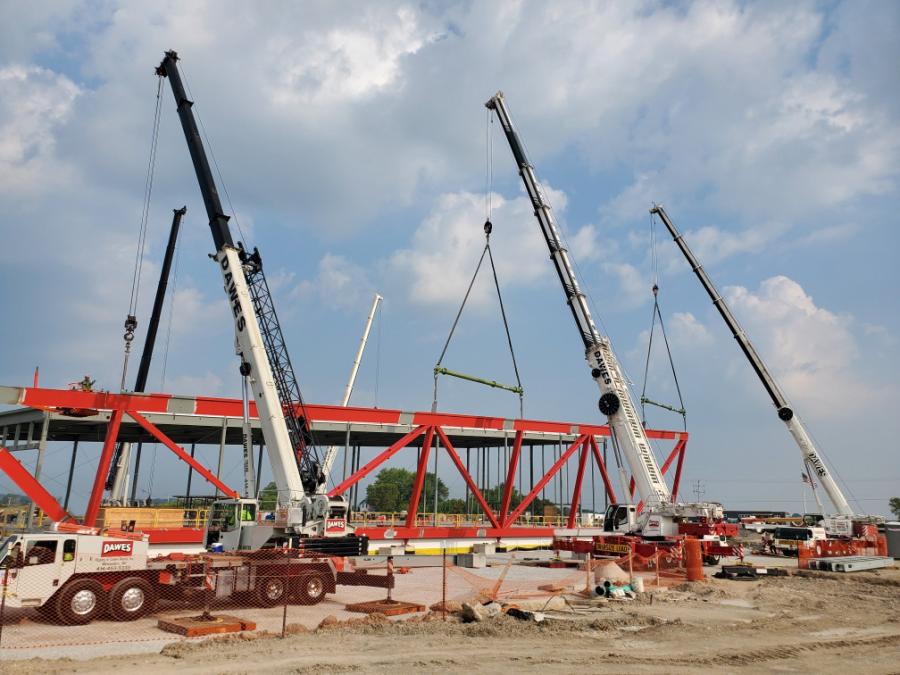 In the first major phase of construction, Dawes sent six cranes to help lift and secure two 250-ft. steel trusses that form opposite sides of the structure. (Archives & Armory of PMML photo)

Construction of an ambitious archive dedicated to military history is under way in Somers, Wis.

Dawes Rigging & Crane Rental, a member of the ALL Family of Companies, has been involved in construction nearly from the beginning. Most recently, two separate battalions of cranes were deployed to help construct the project's centerpiece building.

In the first major phase of construction, Dawes sent six cranes to help lift and secure two 250-ft. steel trusses that form opposite sides of the structure.

Each truss was hinged to the bottom of the structure, with cranes rigged to the truss and lifting in unison to take the workpieces from horizontal on the ground to vertical. Trusses were erected by Area Erectors, Dawes' customer. Joint general contractors are Pepper/Riley Construction.

"These two large trusses wing off the edge of the building," said Tyler Weiher, rental specialist with Dawes. "We set up three cranes on each side to stand up the trusses and hold the angle while an RT came in to tie the trusses into the building."

Seeing six cranes lifting in perfect unison is something to behold, and it took a lot of planning. First, Fast Track Engineering assessed the trusses and developed a plan for placing each crane, including precisely how much load each unit should carry during every phase of the lift. Once submitted, Dawes' in-house engineer reviewed the plan and signed off on it.

"We used dynamometers on each load point, which gave us the range each crane needed to stay within," said Weiher. "We used that information to spec the crane package for the lift."

Dawes' crane operators could then keep an eye on load cells during the lift to know they were within range.

The resulting lifts went off smoothly and both trusses were up and secured within the same 10-hour workday.

The teamwork wasn't over. Later in the project, Dawes delivered a separate five-crane package to lift and set two 85-ft. cantilevered trusses. To be set at the front of the structure, these will jut out on either side of the entrance courtyard.

Although these trusses were much smaller than those in the previous lift, this lift was actually more complicated because each truss had to be lifted, rotated and angled before being set. Plus, they were not already hinged to the building as the others had been.

The cranes Dawes supplied were two Link-Belt HTC-86100, two Link-Belt HTC-8675, and one Liebherr LTM 1130-5.1. The HTC-86100 and HTC-8675 hooked to each truss and performed the initial lift and rotation. Next, the Liebherr LTM 1130-5.1 dropped its hook down to the base and lifted to achieve the proper angle. Each piece was held in position for approximately four hours while ironworkers welded it into position.

Recently, Dawes delivered a Liebherr LTM 1450-8.1 to set two pedestrian bridges on the grounds. Work at the site is scheduled to be completed in phases over the next several years. 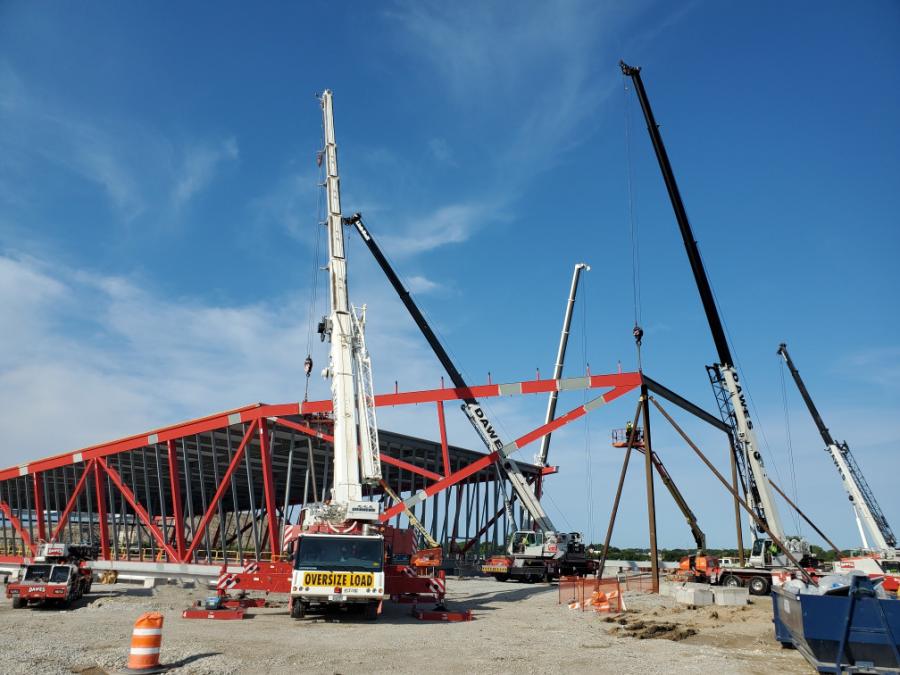 The Pritzker Archives & Memorial Park Center supports the Pritzker Military Museum & Library's mission of preserving the past, present and future of the citizen soldier.

This archive center is a space to restore, preserve and provide storage for collections that include books, artifacts, and other historic materials. Other components of the project include a 9,687 sq.-ft. gallery that will display exhibits drawing from the Pritzker Military Museum & Library in Chicago; Commercial Archives, a facility specializing in firearms education and training; Cold War Veterans Memorial; and community green space.

Manitowoc has expanded its Grove truck crane offering with the new four-axle TTS9000-2, boasting all-wheel steering and an impressively long boom on a lightweight carrier.

Manitowoc's longstanding relationship with the International Union of Operating Engineers (IUOE) is further cemented with the delivery of a new MLC150-1 lattice-boom crawler crane to the IUOE's International Training & Education Center in Crosby, Texas.

As a critical next step in achieving the Tadano Group's long-term environmental targets, Tadano Ltd.

The condition of a crane cab says a lot about not only the crane owner but the crane operator. Crane owners can make running a rig a better experience with state-of-the-art operating systems and controls in the cab, but it's the operator's responsibility to ensure his or her "office" is tidy and uncluttered.

In the inner harbor of Wilhelmshaven, Germany, three Potain tower cranes have been constructing residential buildings for the Wiesbadenbrücke development, which will have 300 apartments and the promise of "maritime and urban living in the center of Wilhelmshaven." A Potain MDT 132 G8 and an MDT 189 were assembled in October and November 2019, respectively, and a second MDT 132 G8 was added to the job site in September 2021.