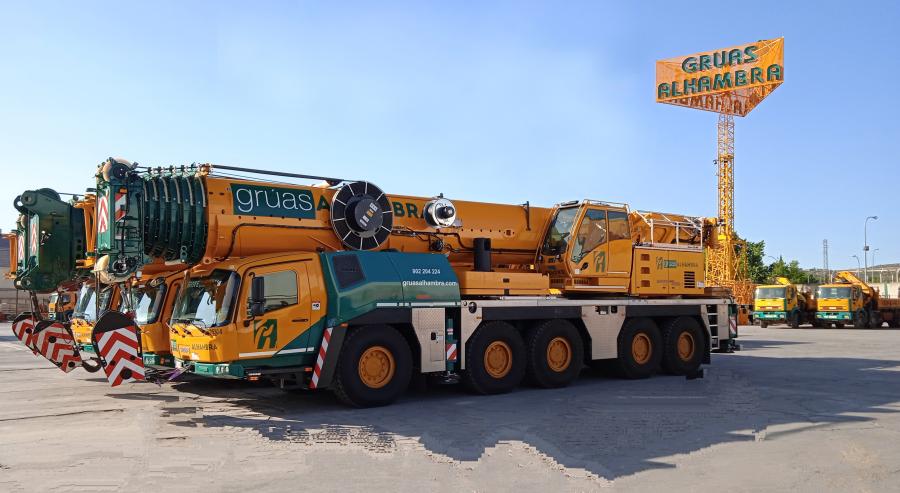 The Spanish rental company has specialized in mobile cranes for more than 50 years, offering high quality machines, that are operated by the best people, to jobs across Andalusia. A focus on quality led Grúas Alhambra to develop a relationship with Manitowoc and its Grove brand.

"We were attracted to Grove because of the very good load charts on the new crane models, as well as its technology, and of course, the drive systems, which are far superior to any other crane," said Abraham Molina, CEO of Grúas Alhambra.

"We have been working with Grove for three years and our relationship with the whole team is very good. We decided to purchase a new Grove GMK5250L-1 because of the very good results we got from our GMK5250L, and the excellent aftermarket support we received."

The Grove GMK5250L-1 builds on its predecessor, the GMK5250L, to deliver greater levels of performance while maintaining the highest-rated load charts, best maneuverability, quickest setup times and greatest operator comfort in its class, according to the manufacturer.

The GMK5250L-1 offers a 230 ft. boom, as well as a 70 ft. optional hydraulic swingaway jib, which can be extended with either a 26 ft. boom extension, two 26 ft. jib inserts, or a combination of both for a total jib length of 121 ft. This offers unmatched load charts — the kind usually offered by six-axle cranes. Grúas Alhambra will utilize both the jib and boom extension to take advantage of the full capabilities of the crane.

Another benefit of the jib is the ability to reach over obstacles with an increased offset of up to 50 degrees.

The Grove GMK5250L-1 comes complete with interchangeable counterweight slabs and can use the same slabs as the GMK5180-1, GMK5200-1, GMK5250XL-1 and GMK6300L models. For its new GMK5250L-1, Grúas Alhambra is reusing an existing self-rigging auxiliary hoist from its GMK5250L. 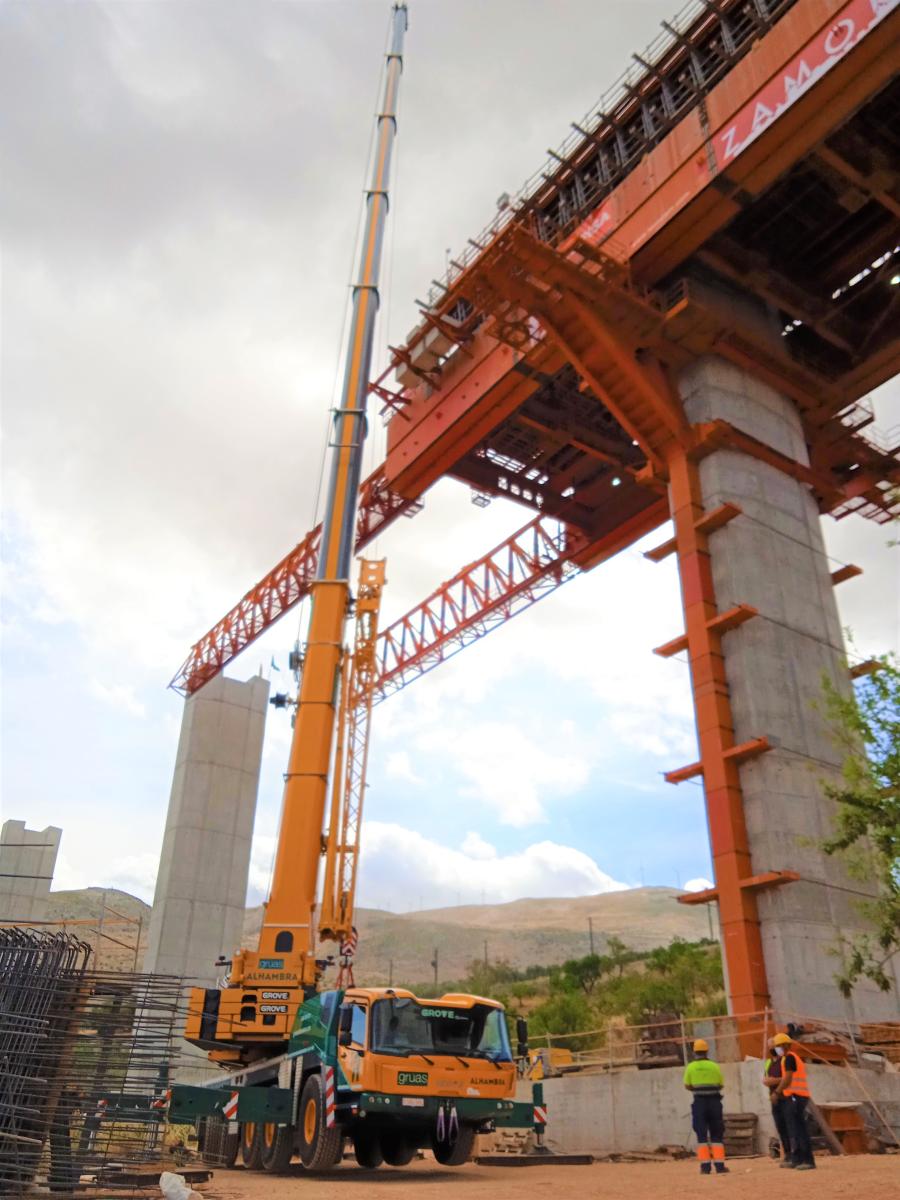 "The crane offers great capacities without having to move much counterweight, which means good cost savings when mobilizing the crane," Molina said. "Also, it is very important for us, due to our location, that our new GMK5250L-1 all-terrain crane was ordered with a 10 x 8 traction and VIAB turbo retarder clutch system, which allows us to access the most challenging jobs in mountainous areas."

The VIAB turbo clutch on the GMK5250L-1 is commonly used by heavy-duty trucks and was first seen on the Grove GMK5250L. VIAB enables wear-free starting and braking, and it avoids overheating and burning, which reduces fuel consumption to a minimum. VIAB is a turbo coupling and integrated retarder all in one, which means less weight and a smaller footprint.

When Grúas Alhambra's new Grove GMK5250L-1 all-terrain crane was delivered in 2021, it was put to work immediately.

"The commissioning was very fast, and we had it ready the same day it came through the door. For the first job we had all the documentation in order," Molina recounted. "Its first job was to remove a turbine from the reactor of a thermal power plant in Malaga. The boom length was very important, due to the height that was required and the weight we had to lift. The work was done in one day. The crane is easy to handle, and the operators understood it right away."

Grúas Alhambra's positive experience with Grove also gave the rental company the trust and confidence to purchase a used Grove GMK6400 all-terrain crane. The GMK6400 has the best lifting capacity of any six-axle crane, combined with small dimensions and fast setup times. It is often used instead of seven or eight-axle cranes, which saves time, money and effort for owners. 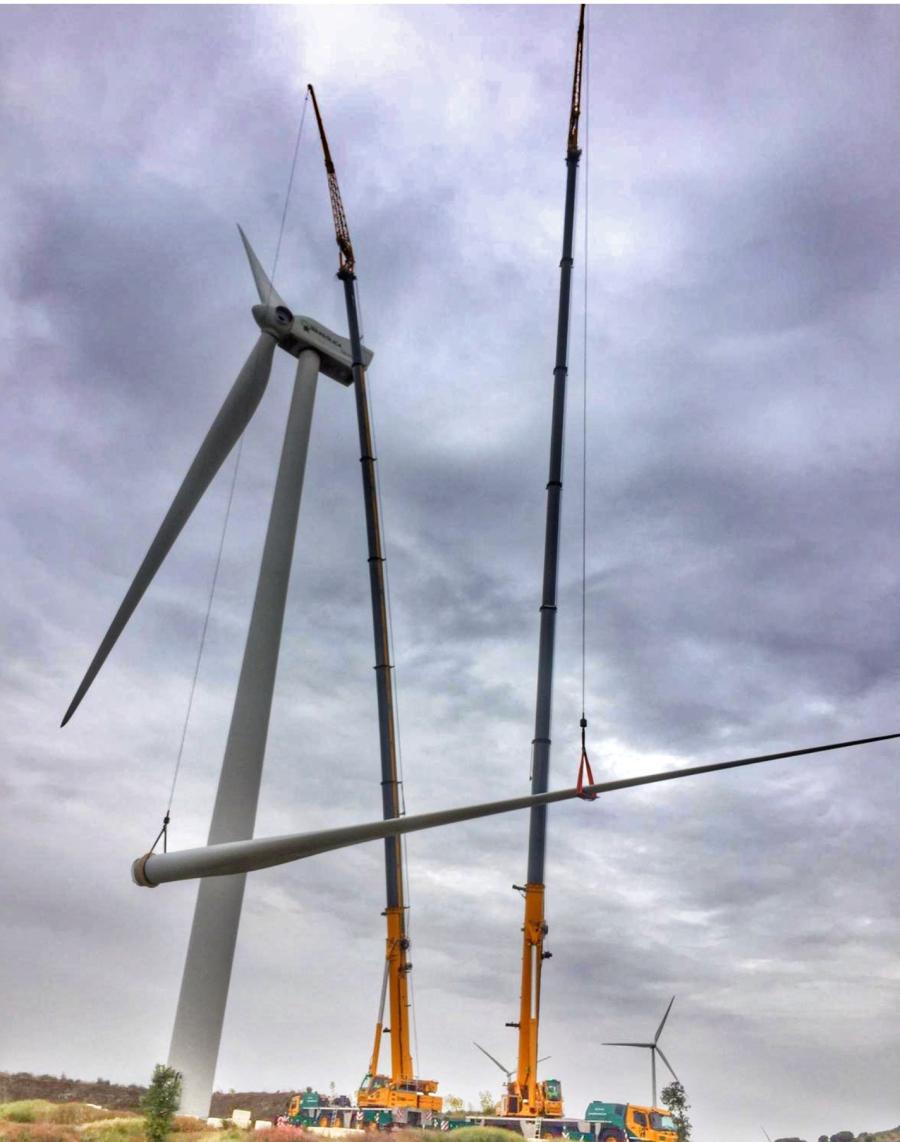 "We needed a crane with greater capability to undertake new challenges, and the Grove GMK6400 has excellent load capacities with very compact dimensions, which allows us to access job sites easily," Molina said. "The GMK6400 works perfectly and adds great value to our company because it opens up work that we couldn't take on in the past."

The 441-ton capacity machine has a 197 ft. main boom and up to 259 ft. of luffing jib, giving it a maximum possible tip height of 446 ft., and the ability to handle loads out to 315 ft. radius. When combined with the self-rigging MegaWingLift, the crane's capacity on the main boom is increased by 70 percent and by up to 400 percent when using a luffing jib.

For Grúas Alhambra's new Grove GMK5250L-1 crane and used GMK6400, the company can count on reliable aftermarket support from Manitowoc.

"The service is very good, both in person and over the phone. We have no complaints. Any issues we've had with our GMK5250L over the past three years have always been solved quickly and correctly. The idea is to continue with Grove cranes in future, as they fulfil their tasks perfectly. We are very happy with the operability and ease of transfer, both on- and off-road."