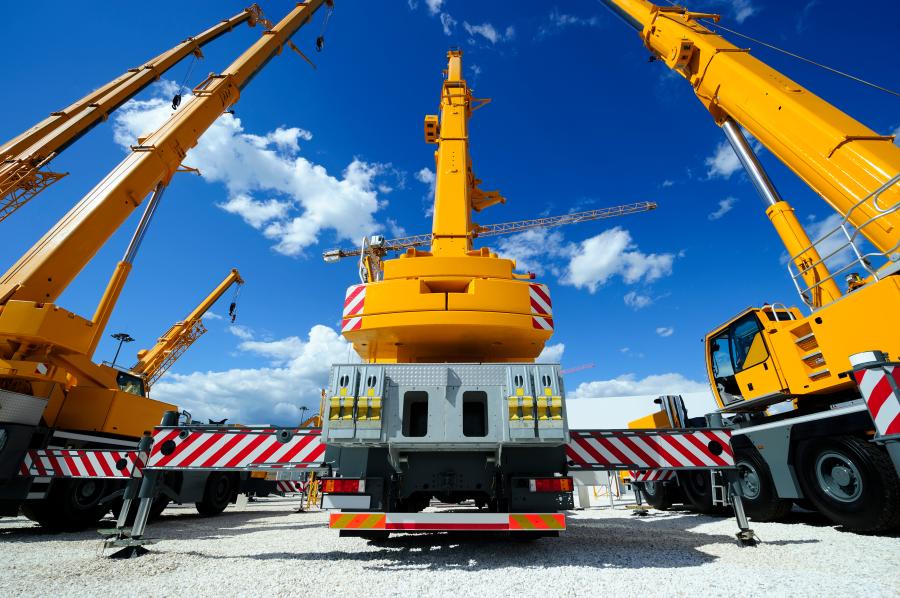 After taking a dip in 2021, the North American crane sector is experiencing a comeback. In its first quarter report released in April, the Rider Levett Bucknall (RLB) Crane Index logged a 4.5-percent increase in cranes at work across the continent. Toronto, Canada, is ahead of the pack in terms of number of working rigs.

RLB reports that the crane industry is "essentially recovering to crane counts from this time last year."

Of the 14 cities surveyed, five experienced an increase, six stayed the same and three decreased.

"With previously delayed projects being brought back online, the crane count experienced an increase of 22 cranes," said RLB.

Historically, residential cranes make up 50 percent of the count, while mixed-use makes up 22 percent.

The third most-active sector is commercial, making up 10 percent of the total count.

"Downtown Civic Center Building and Plaza construction is set to begin this year," she said, noting several projects in the spotlight.

Also, "a new Marriott hotel and Dream Hotel Las Vegas will start in 2022," said Sewell. "Near the convention center, construction of Fontainebleau continues."

The number of working rigs holds steady in Los Angeles, where multi-family residential and mixed-use projects account for 67 percent of crane utilization.

"The count for cultural and civic projects has slightly increased to 8 percent, and healthcare and hospitality sectors rose 6 percent and 8 percent respectively," said Sewell. "The cranes dedicated to transportation projects account for around 8 percent of the local count."

In New York City, the crane count has seen a slight increase. Half of the total is located in Hudson Yards and the rest within the parameters of 59 Street to 14 Street and Second Avenue to 12 Avenue. 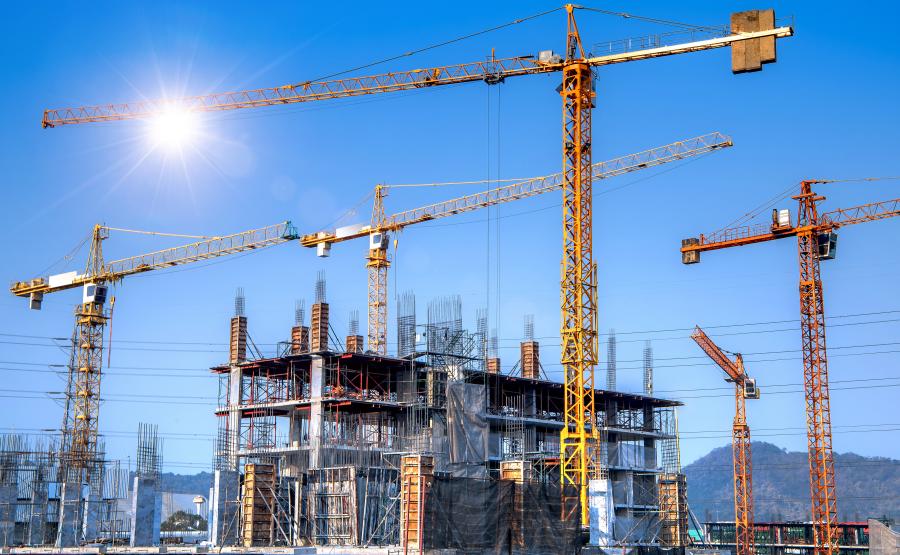 She noted that over the past few years, the city's crane count has dropped dramatically.

Sewell attributed the drop to the possibility that developers are looking to repurpose existing buildings, such as the Waldorf Astoria hotel and the post office across from Penn Station.

According to RLB, there is stability in Phoenix, where the number of operating cranes remains unchanged.

Rigs are at work at residential developments, including Skye on 6th, a 26-story apartment complex that includes a parking garage and retail ground floor.

Another project at 3rd Street and Garfield, will be a 24-story multi-family development, with retail, conference and business spaces on the street level, said Sewell.

Portland, Ore., has seen a small decrease in the number of cranes at work, as larger projects near completion, she said.

"The highest concentration of cranes is in the Southwest along the waterfront," said Sewell, adding that most projects are mixed-use or residential.

Those projects include senior living and affordable housing developments, but additional cranes are expected to work on several university, healthcare and aviation projects set to launch this year.

In San Francisco's downtown area, an increase in the number of cranes has been incremental.

"The large majority of cranes are allocated to residential and mix-use developments with industrial and commercial projects accounting for the remainder," said Sewell. "New residential developments in the Marina and Nob Hill neighborhoods reflect the city's critical need for housing."

Seattle's Capital Hill area has seen a resurgence in construction and the crane count there holds steady. Downtown Seattle has actually experienced a reduction in the number of rigs at work.

As in other major cities, the majority of crane activity is in the residential sector, but education projects are on the rise. Construction of healthcare facilities is steady while commercial work across the city is on the decline.

Since 2015, Toronto has led the North American crane count, and this year saw a 12 percent increase in cranes across the city, reported RLB.

This even as projects were completed, dropping 18 cranes from the previous survey count.

The Toronto commercial side leads in crane demand with 18 more rigs at work on projects in that construction sector. Residential and mixed-use projects also grew and marked a combined increase of seven cranes.

In Washington, D.C., the crane count has dropped as residential and mix-used projects have drawn to a close, but "indicators for future growth are evident," said Sewell.

"The pipeline for hospitality and residential sectors is particularly strong," she added. "Throughout the Buzzard Point neighborhood, many new mixed-use projects are in development."

In response to the upswing in crane counts, several crane providers have feathered their fleets with new rigs this year.

The All Family of Companies, Cleveland, Ohio, announced a purchase package of more than two-dozen Manitowoc and Grove cranes for its rental business this year. It includes 16 Grove rough-terrain cranes with capacities from 30 to 165 tons. The RTs will be tagged for daily construction work as well as the thriving wind market, according to All.

"Equipment from Manitowoc and Grove are essential components of ALL's product mix," said Michael L. Liptak, CEO and president of ALL. "These new additions to the fleet will give our customers outstanding flexibility for projects from the everyday to their most challenging."

In total, 60 new cranes are being added to the ALL fleet this year, and approximately half have already been delivered, said the company. The machines will be distributed across ALL's 33 North American branches based on market demand.

The package is "part of our continued commitment to the best quality equipment available in the North American tower crane market, along with our long-term growth strategy," said Peter Juhren, president and COO. 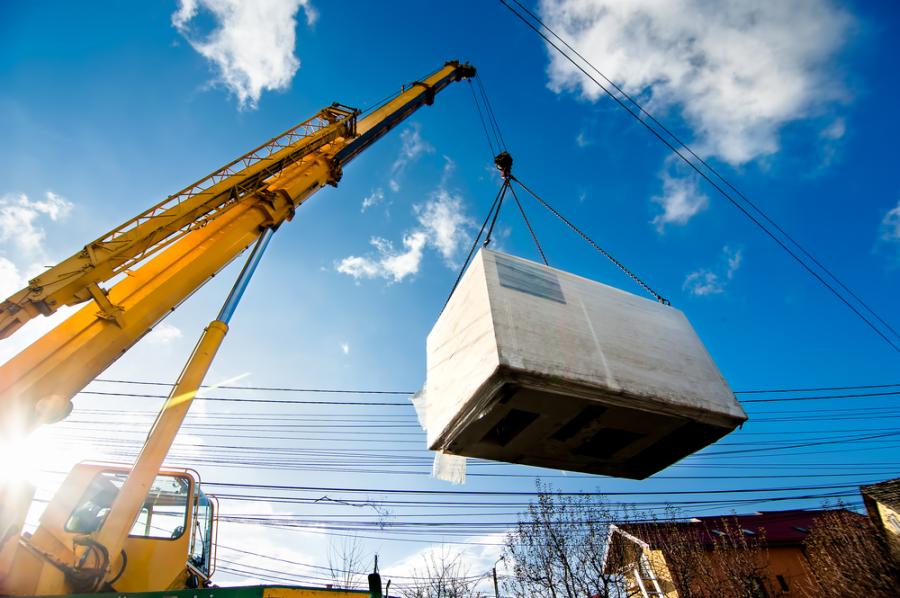 In Bridgeville, Pa., Maxim Crane announced this summer the company has purchased 51 Grove mobile cranes. The package includes a mix of high-capacity RT cranes as well as five- and six-axle all-terrain (AT) cranes and reflects customer demand.

"We evaluated each category of our current rental fleet and analyzed research data and conversations with our customers to determine what cranes they would need to meet their lifting needs for the next five years," said Bryan Carlisle, CEO. "Based on the data, we felt that the combination of large RT cranes and AT cranes would enable us to maximize our uptime, increase our ‘rental readiness' and provide the equipment that would be most versatile throughout the entire Maxim Crane footprint."

Not quite so dramatic in number, several smaller crane orders placed this year have had a significant impact on their regional construction markets.

"Aside from capital jobs, these cranes are generally being used on maintenance tasks, such as changing out gearboxes, conveyors and roof fans," said Rod Ashman, Tri-County's crane operation supervisor. "Sometimes we'll require every pound of capacity and inch of available boom, and then the very next job might just be hoisting a 2,000-pound motor onto a 30-feet-high balcony at a 20-foot radius. We can go from main boom picks of 50,000 pounds to erecting the jib and fly for a tip height of 275 feet in a matter of minutes."

Ashman said reliable performance is crucial to ensure the company fulfills its contract with the client.

"It all comes down to keeping our cranes maintained and in top working condition," he said.

A third-generation crane company, H. A. Leo offers rigging, lifting and hauling throughout New England. In the 100- to 120-ton class, the AT crane was what the company needed for the type of work it does on a daily basis as well as the category of customers it serves.

"Telecrawlers are easier to operate, easier to mobilize, and when you can scope the boom in and out as well as retract the tracks in hydraulically, it makes it better for a variety of different applications," said Tyler Fane, vice president.

"We expect the crane count to remain steady," said the construction consultancy.

The company noted that the even keel remains despite the fact that many projects are experiencing delays in their schedules due to supply-chain issues.

"Construction costs continue to climb up, giving some developers hesitancy to break ground at this time." CQ