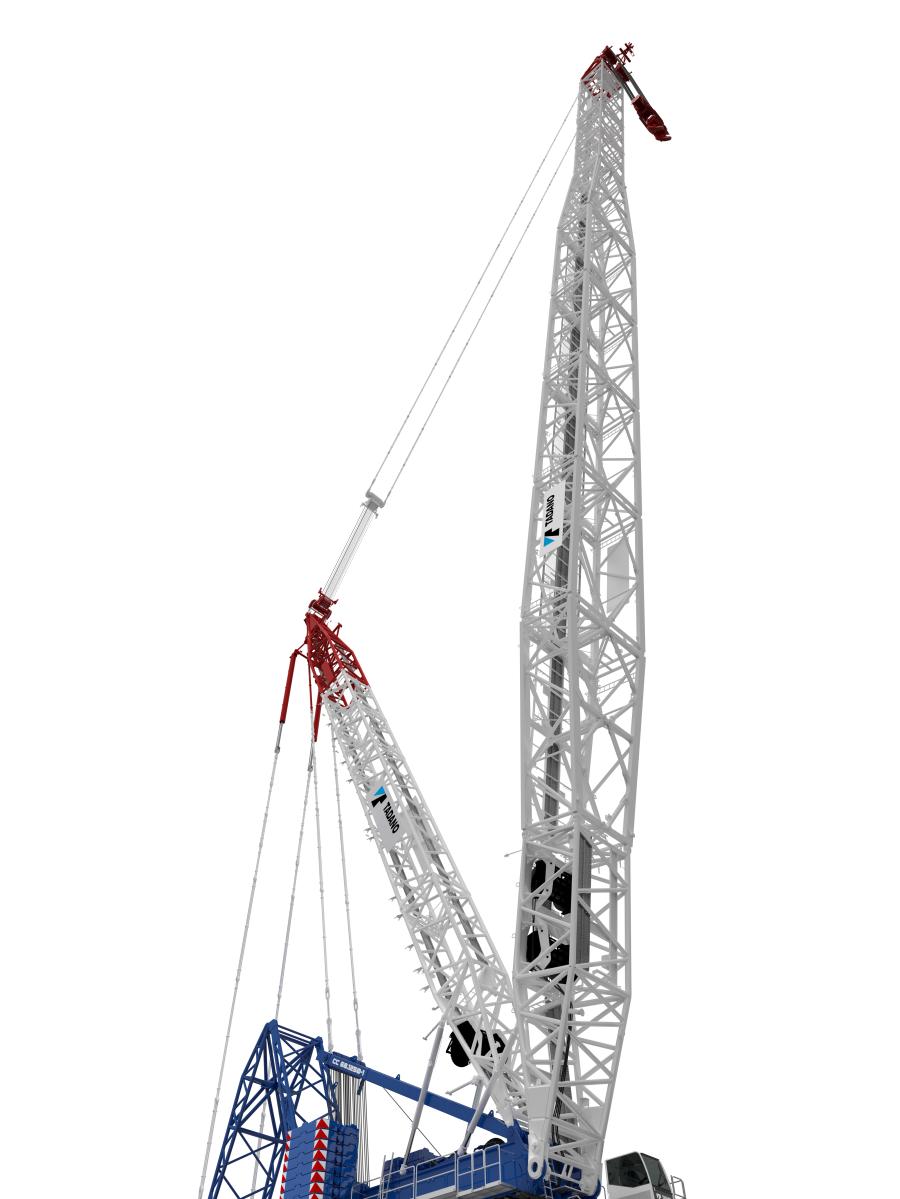 Boom Booster kits for the CC 68.1250-1 are available in lengths of up to 334 ft., enabling the crane to reach a hook height of 636 ft. with the additional boom sections. Moreover, Tadano offers the Boom Booster not only as a retrofit for existing cranes, but also as an optional accessory for new ones.

Boom  Booster kits for the CC 68.1250-1 are available in lengths of up to 334 ft., enabling the crane to reach a hook height of 636 ft. with the additional boom sections. Moreover, Tadano offers the Boom Booster not only as a retrofit for existing cranes, but also as an optional accessory for new ones.

With its maximum lifting capacity of 1,378 tons, the Tadano CC 68.1250-1 lattice boom crawler crane is indisputably one of the most powerful representatives of its class, and combines this with extraordinary performance in all working ranges, according to the manufacturer.

In addition, its two engines also stand out with a total output of 640 kW that makes it possible to achieve particularly fast working speeds with simultaneous movements. And that is only the beginning. The crane also shines due to a whole series of technical advantages.

The basic machine has a transportation width of only 9.8 ft. and a boom width of 11.5 ft., enabling the crane to already leave many competitors "in the dust" on the way to the work site. Once there, the large adjustment range of its Vario-SL system, which goes from 49 to 79 ft., contributes to the aforementioned load moment. And its telescopic SL system with a cart or tray is also particularly flexible, as adjustment ranges of 59 to 79 or 79 to 98 ft. are possible.

There is also the option of using luffing gear 1 as hoist 3 — an advantage derived from the fact that the CC 68.1250-1 uses wire ropes with an identical diameter. Moreover, there is the relatively inexpensive option of converting the CC 68.1250-1 to a pedestal crane with four hydraulic outriggers so that it can also be used on uneven terrain without the need for time-consuming ground leveling operations.

And last, but not least, the well-engineered access points mean that assembly technicians and operators have easy access, especially for crane components on the right side of the crane.

From a simplified perspective, the new Boom Booster for the CC 68.1250-1 can be described as being made up of additional boom sections that are particularly stiff. Its design consists of an 36 ft.-long lower adapter, an upper adapter of the same length, and a series of 33 ft.-long intermediate sections.

The trick: The components can be split lengthwise and can be connected to each other in an offset arrangement for transportation purposes. The corresponding pinning is taken care of with a hydraulic pinning tool that comes as standard with the crane and that makes the process much easier.

The intermediate sections can be transported either as complete units with catwalks, including fall protection and rods, or without these parts. In the latter case, up to five catwalks can be stacked and transported in separate racks.

Meanwhile, the lower adapter, which is the heaviest component, comes in at 24 tons and has a transportation length of 39 ft.

"These weights, which are pretty small in comparison to the available load capacities, were achieved with a structurally optimized designed with welded chord boxes," said CC  Business Unit VP Ingo Nöske.

Needless to say, the compact transportation dimensions and relatively low weight of the components ensure that the Boom Booster can be transported easily and cost-effectively. And since all connection points can be operated from the ground, which eliminates dangerous and time-consuming work at heights, its assembly and disassembly are also particularly safe and fast. In fact, setup is already significantly simpler than is the case, for example, with twin boom systems that also increase lifting capacities, as the Boom Booster is assembled by simply connecting two connection points at the ends of the intermediate sections, the manufacturer said.

When developing the Boom Booster for the CC 68.1250-1, the forward-looking engineers at Tadano made sure that it would be possible to use it with future crane models in this class as well. In fact, the same goes for the corresponding Tadano Flex Frame and its future-proof design as an alternative to the telescope connector.

The optional Flex Frame unit replaces the conventional telescopic cylinder and makes it possible to continuously adjust the Superlift counterweight radius to any point between 59 and 98 ft. This means that less counterweight needs to be set up and removed, significantly reducing setup times.

In addition to the Flex Frame, the Boom Booster requires the use of an SL mast extension from 132.8 to 147.6 ft.

Tadano also recommends the use of the new SL Tray with improved access and the optional Split Tray, which is also available as an upgrade. In fact, the Split Tray makes it possible to easily and quickly uncouple the counterweight that is no longer needed after erecting the main boom. After doing this, the crane can simply be operated with the Superlift counterweight that is actually needed, saving assembly time, reducing the amount of personnel needed, and eliminating the need for an assist crane, the manufacturer said.

"This combination is particularly effective together with the new Flex Frame, as you get a significantly smaller crane counterweight tailswing radius when compared to the telescope connector, and this means taking up less space at the work site," Nöske explained.

With the Boom Booster, Tadano has optimized the CC 68.1250-1 for jobs in the wind power industry and other projects where large lifting heights and lifting capacities are required. For instance, the Boom Booster increases the crane's maximum hook height from a previous 590 ft. to 636.5 ft., and its maximum load weight at this hook height from 108 to more than 110 tons. This means that the CC 68.1250-1 is now also able to erect wind turbines with hub heights of up to 607 ft. And with medium and long booms in particular, the CC 68.1250-1 can reach lifting capacities of up to 30 percent more with what is already a powerful 11.5 ft. wide boom — including on the luffing jib.

Finally, in order to make it possible to take full advantage of the Boom Booster's performance with short and medium boom lengths of up to 393.7 ft. as well, Tadano also offers optional hoists with a longer 4,921 ft. wire rope instead of the standard 4,068 ft. wire rope for a higher number of reeving parts.

The Boom Booster's high flexibility is further increased by its versatility with all kinds of configurations: It can be used with heavy and with combined — that is, stepped — main booms, with a luffing jib, with a heavy rigid jib including a Vessel Lifter, and even with a lightweight rigid jib.

The modular boom system behind the Tadano CC 68.1250-1 is seeing its impressive versatility and performance be significantly boosted with the Boom Booster, which in turn means that the crane can now be used for a range of applications that is significantly wider than ever before — all this with relatively low investment costs, as the cost of this upgrade is minute when compared to purchasing a new crane with comparable performance data, according to the manufacturer.

In addition, the fact that the Boom Booster has a future-proof design means that it will also be compatible with future models in this capacity class, ensuring that the investment will continue to pay dividends in the long run.