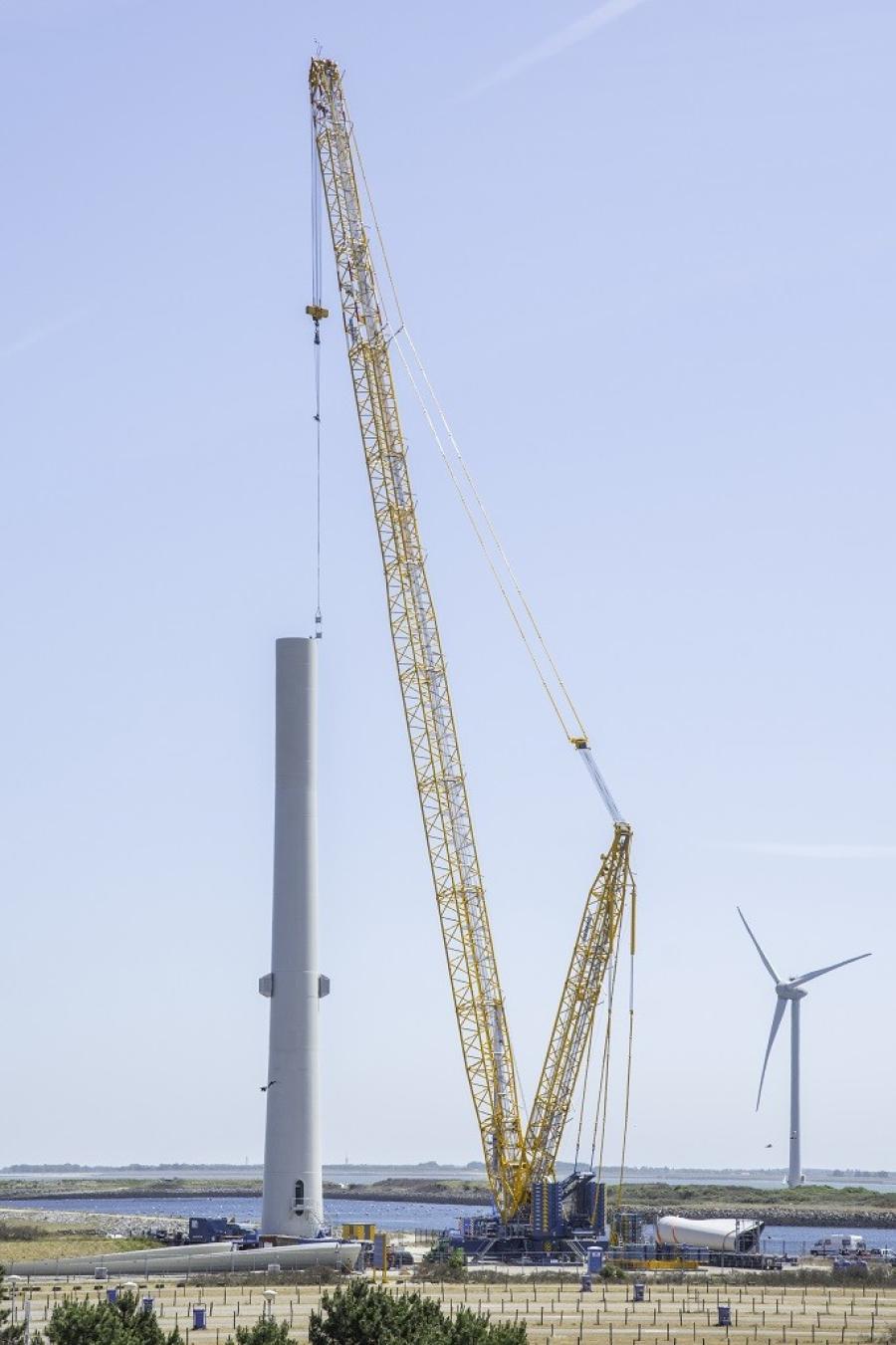 Sarens used a separate crane for each wind turbine, so as to complete the job as quickly as possible, with the units being a Demag CC 3800-1 crawler crane and a PC 3800-1 pedestal crane.

On behalf of customer Enercon, crane service provider Sarens was scheduled to erect two wind turbines at the Bouwdokken wind farm close to the Dutch North Sea village of Vrouwenpolder.

Project preparation and execution posed a challenge, as the location of both wind turbines was right next to the Neeltje Jans amusement park, which was scheduled to open April 1 and was under no circumstance to be disrupted by the project execution.

For this reason, Sarens used a separate crane for each wind turbine, so as to complete the job as quickly as possible, with the units being a Demag CC 3800-1 crawler crane and a PC 3800-1 pedestal crane.

The pedestal version's most outstanding characteristic, however, is its ability to perform work at sites where the ground is uneven, the manufacturer said.

While crawler cranes need a large and perfectly straight surface with a gradient of 0 to 0.3 degrees in order for an operator to be able to use their full rated lifting capacity, the PC 3800-1 only needs four load-bearing surfaces for its outrigger supports, and even these surfaces do not need to be perfectly aligned with each other. The reason for this is that the outrigger cylinders are able to compensate for small differences without a problem — up to 2.1 degrees on a 12 by 12 meter support area. This means that the pedestal crane requires significantly less ground preparation.

"This has made the PC 3800-1 absolutely indispensable time and time again," said Sarens Project Manager Pascal van der Spoel, who not only used the two Demag siblings at the work site, but also an impressive fleet of additional cranes.

"We also had two [220 ton] and two [551 ton] all terrain cranes there, as well as an additional [220 ton] crawler crane, and we used them primarily to unload and pre-assemble components," said van der Spoel, who was in charge of a team of up to 15 people at the site.

Given the April 1 deadline, the Sarens team only had 10 weeks to complete its work at the wind farm, and that included unloading, pre-assembling and erecting the wind turbines.

"We were aware that the work site was located in a windy region between the Eastern Scheldt and the North Sea, so we'd already scheduled in a time buffer in order to compensate for any delays caused by heavy winds," said van der Spoel, whose team worked with the Zweibrücken factory beforehand in order to confirm the maximum permissible wind speeds for work with both cranes for specific crane configurations.

In addition, the Sarens team built special fixtures to be able to safely set down the main boom on the ground if necessary due to heavy winds.

The team also had to face another challenge: The work site was located right in the middle of a breeding ground for birds that is also part of the Delta Works, a system of construction projects in Zeeland designed to protect against floods and storm surges. Accordingly, the area enjoys special protection by the Dutch Ministry of Infrastructure and Water Management and there were various requirements that needed to be met before work could be carried out.

"On top of that, there wasn't enough space to store and prepare everything on the amusement park grounds. All the mentioned circumstances Sarens had to take into consideration obviously put additional pressure on us to finish the project within a tight deadline," van der Spoel said.

All of this meant that his team had to be able to be flexible and count on the two cranes' reliability and performance — and hope for good weather. Then again, no one in the team had any doubts concerning the cranes. In fact, everyone knew that with a lifting capacity of 715 ton at a radius of 39.4 ft. and a maximum load moment of over 66 ft-kips, the Demag PC 3800-1 and the CC 3800-1 were more than powerful enough to erect the wind turbines without a problem.

"And that's actually one of the reasons why we decided to use the two Demag cranes for the job," van der Spoel said.

... with Power and Precision

While the wind turbine components were brought to the work site by ships, the cranes got there by land: The PC 3800-1 from a wind farm in Spain and the CC 3800-1 from Metz, where it had been used to help build a soccer stadium.

Once at the Bouwdokken wind farm, the two cranes were able to truly shine together with lifting heights of up to 328 ft. and loads weighing up to 165 tons. Erecting the wind turbines required lifting eleven components for each: five tower elements, plus the nacelle, generator, hub and three rotor blades. Since all the components were unloaded from the ships in a horizontal position, they first needed to be brought to a vertical position for the lifts. An assist crane was used for this purpose.

The complexity of the execution comes with good preparation and defining the right equipment, a process Sarens follows on every project and has become a professional routine for the Sarens team.

"The two large Demag cranes took care of the lifts smoothly thanks to their enormous power and high precision. Just like we knew they would," van der Spoel said, after mentioning that he was never once worried about not completing the work on time.

For more information about the Sarens Group, visit www.sarens.com. 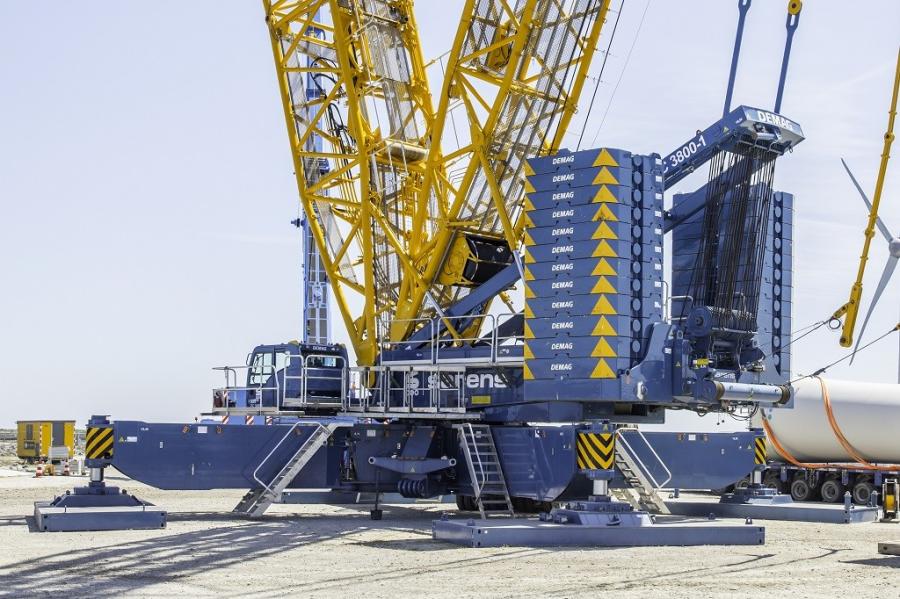